Pentimenti: Notes on Process and Materials

"We stand in front of Gregg Chadwick's painting and allow it to enter into us, perhaps even to ravish us, not only with its peculiar beauty but with its wholeness.  What we “get,” if we pay attention, is the entire process of its making, from the earliest layers of paint to the final, translucent touches.  The eye/mind is kept in constant motion, exploring the layers of paint as, themselves, metaphors for and evidence of layered time.  The predominant movement of the broad brush strokes, we notice, is up-and-down or side-to-side, with emphasis on the horizontal sweep that leaves in its wake the blur of never-quite-arrested motion." - Peter Clothier, Time and Again

My medium and large scale artworks are created with oil paints on stretched Belgian linen canvases. Before I paint, I lay my colors out on the palette in a range from light to dark and warm to cool. As I mix my paints, I think about light. I want an interior light that emerges from the painting. Over the years I have honed my ability to see subtle nuances of color both during the day and at night. I collect moments in my memory by standing still and taking in the sensations of an evocative evening or a cool dawn. I often begin a painting with the intention of capturing one of these remembered moments and its particular atmosphere of color and light.

Ghosts of earlier ideas appear within my artworks and combine with other transparent moments to create a semblance of movement, of time passing. In antiquity and later during the Middle Ages, manuscript pages made from animal hides were often scraped down and used again. Faint traces of the underwritings on these parchments, called palimpsests, survived. My painting process involves a series of applications and erasures, echoing these layered fragments from the past. At times, I scrape down entire wet paintings leaving a fragile palimpsest. These under images often bring forth mysterious fragments from my subconscious. I build a combination of shadow and illumination in each painting to create a sensation of light emanating from the work. I work with oil paint and usually create at least one color in each painting from ground pigments mixed by hand with linseed oil. Linseed oil has the propensity to grow more transparent with age and visible traces of earlier painted marks gradually appear because of this tendency — called pentimenti. I embrace this eventual outcome in my work and incorporate planned and unplanned pentimenti in my process.

By layering paint upon paint, I build an artwork through a succession of present moments in time that often combine in unforeseen patterns. A viewer recently remarked that my paintings resemble "time travel where the molecules are not quite sure where they belong." This visual conundrum plays with the proposition of many quantum physicists that time may not exist at the most fundamental level of physical reality.

As a High School student, I took art classes at the Corcoran School of Art in Washington DC. The classes were held in a grand 19th-century skylit studio. We drew from the model and learned how to make our own paint from ground pigments and egg tempera. Time seemed to stand still when I was drawing or painting. The touch of the brush onto canvas seemed to become part of me.

My current studio is in an old airplane hangar at the Santa Monica Airport. When I first walked into the space I was awed by the enormous ceiling and light flowing from the skylights above. Each day when I unlock the door and step into my creative home, I am filled with ideas of possibility and opportunity. My space is filled with artworks in progress, a large table with jars full of clean brushes, and a palette covered with paint from years of use. Tubes of oil paints line the edges of the table in a rainbow of possibility. The back wall is lined with books in a large wooden bookshelf. Art books, novels, poetry, history, science, and politics crowd the shelves. When I am working, numerous volumes are spread open throughout the space, offering ideas and inspiration.

My studio essentials are books, natural light, and music. As mentioned above, my books span all genres but the art books in particular are like old friends – always ready for a visit or a chat. My favorite artists seem to speak to me through the pages – Richard Diebenkorn, Mark Rothko, R.B. Kitaj, David Hockney, Alice Neel, Georgia O’Keefe, Neo Rauch, Adrian Ghenie, Kerry James Marshall, Ando Hiroshige, Casper David Friedrich, Paul Cezanne, Velazquez, and so many more.

In the late afternoon in my studio, the light turns golden and seems to gild the edges of my paintings. In these moments the air seems to grow viscous, submerging the space into a room full of mystery.

Each body of work that I create has a sort of soundtrack. I have a number of musician friends and their music often interacts with my art. Musicians such as Carlo Siliotto, Kelly Colbert, Michael McDermott, Heather Horton, and Peter Himmelman have all inspired me. While I paint, I usually wear Bluetooth headphones that let me move around the room in a sort of dance. I step from palette to canvas and back again over and over. My current playlists include H.E.R., Nina Simone, London Grammar, The War on Drugs, John Legend, Bruce Springsteen, Little Steven, Ryuichi Sakamoto, David Bowie, Prince, Miles Davis and many more.

Writer Jeffrey Carlson sums up my goals,"Chadwick paints scenes that are representational yet imaginative; they are, at one and the same time, rooted in tangible existence and removed from it. His figures are real and unreal. Engaged in everyday activities or detached from their surroundings, we see them as women and men of the world and as specters of superhuman existence."

Illustrations and elements of this essay were first included in Ghosts of Earlier Ideas | Gregg Chadwick’s Pentimenti Technique, on Obsessed by Art. Thank you Obsessed by Art for featuring me and my art - a wonderful site to follow. 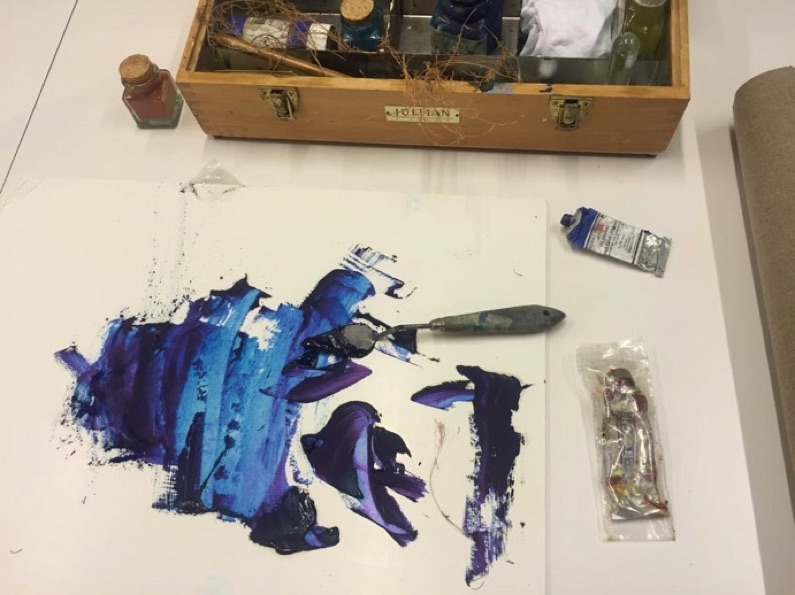 I am often asked how do you know or decide when an artwork is finished?

I will sit with a work for a long time before I determine it is finished. Subtle layers of color and tone are added until I am satisfied that the artwork has its own interior light. I consciously allow space for the viewer to enter into the painting with their own ideas and stories. In this way, all of my artworks are collaborations with the audience.