I lift three brushes wet with paint. Each brush holds its own hue- ultramarine blue, glowing amber, and a cool black. Airborne Toxic Event’s “Sometime Around Midnight”  plays on headphones tethered to my iPhone. The room spins like the song. I almost dance as each brush moves across the linen. Wet paint slurred into wet paint. I search for the light in the dark in a painterly chase through the night.

I paint in a refurbished airplane hangar, the night glowing darkly through the skylights above me. Alone in a vast space, my thoughts travel back to years of painting at night: from a loft in SoHo during New York’s “Bright Lights Big City” years, to a small makeshift space in Tokyo, to a studio in a reconfigured office building on a block of San Francisco’s Market Street that Edward Hopper would have appreciated, to now in a building at an airfield where a fake town was suspended over sensitive areas of the field during WWII to mislead a possible aerial attack.

Like camouflage draped across an airfield, night changes the way we see. Distance is obscured. Color shifts. We see blue tinged black and white under the stars. At night, humans and most vertebrate animals are colorblind because the most sensitive light receptors in our eyes, called rods, detect only black and white. But geckos are different. Painting in what was a military airbase, especially as my mind drifts in the quiet of the night, I often think of the pet gecko my father had in his quarters while stationed in Okinawa. As I struggle to truly see, I wonder what colors my dad’s gecko saw. Geckos evolved from creatures that were active only during daylight, so they did not have rods for night vision. Over time through evolutionary adaptation as geckos shifted to nighttime activity the color receptors in their eyes became more sensitive and enabled full hued night vision. 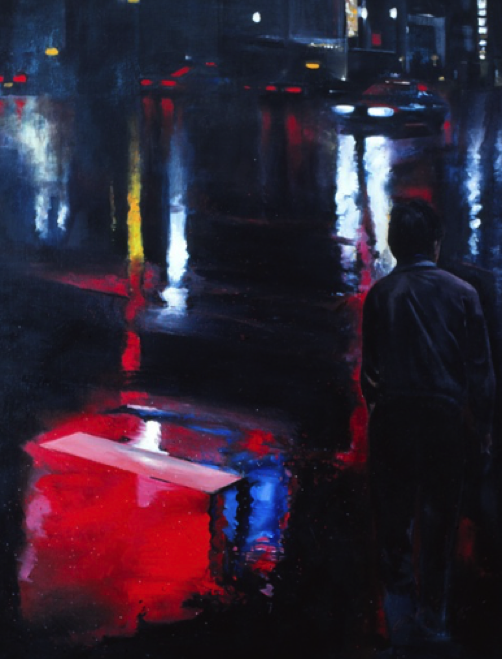 Over the years, perhaps with geckos in mind, I have honed my ability to see subtle nuances of color both during the day and at night. I collect moments in my memory by standing still and taking in the sensations of an evocative evening or a cool dawn. I often begin a painting with the intention of capturing one of these remembered moments and its particular atmosphere of color and light. Before I paint, I lay my colors out on the palette in a range from light to dark and warm to cool. As I mix my paints, I think about light. I want an interior light that emerges from the painting. Painting night reveals the contrast between light and shadow in my artwork and emphasizes the luminosity within the painting.

In the Ginza Rain 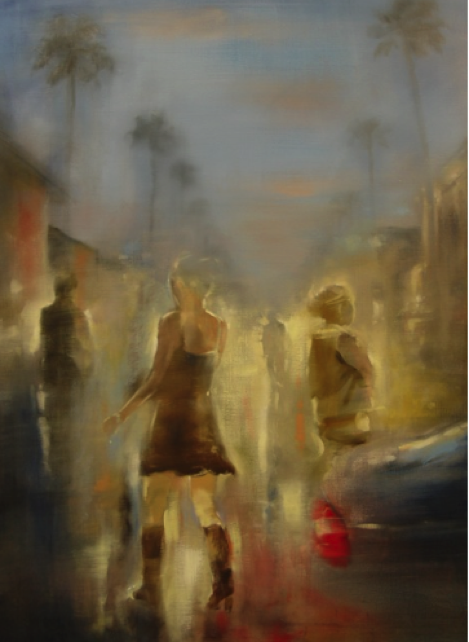 My oil on linen work The Azure Hour combines a certain sense of beach light and air with the dreams and memories of the urban night. On evenings in Southern California when the cool ocean breezes bring a blue fog into the night, it sometimes seems that anything is possible. The painting took over a year of work to finish. It progressed in a series of layers, scumbles, and deletions that created an evocation of the complex nightscape in my mind. I find it necessary at times to paint at night under subtle illumination to see if the effect that I am reaching for has begun to take hold. When the light is too bright it is difficult to see the range of tones from dark to light in a painting. The darkness itself helps create the light. One cannot exist without the other.

Later that week, I stood with René and another conservator, Devi Ormond, before a Van Gogh painting of a weaver; the painting was laid out like a patient on a table in the Getty Museum’s conservation lab. The work seemed so fragile, yet at the same time sturdy and timeless hearkening back to an era of firelight, candlelight, and moonlight. Soon after Van Gogh painted his weavers, the advent of electricity would completely alter the character of the night. . Perhaps in every painting of the night there is a hint of this loss, echoing the shadowed forms in the artwork. I am reminded of the nights many years ago when, before painting, I would put Miles Davis on the record player. I would drop the needle on the first track and listen to the hiss and crackle as ‘Round Midnight began to play – the music always muted, blurred as if it emerged from a smoke filled room.

A few years ago, I stood outside in a clearing of a Monterey, California forest near the coast in the middle of the night with my brother and René Boitelle, senior paintings conservator at the Van Gogh Museum in Amsterdam. Unlike the skies in Los Angeles, we were able to see the stars in the night sky and of course thought of Vincent Van Gogh’s painterly evocations of the glittering night. Van Gogh was able to capture the night in his paintings with his skillful use of midnight blue and starry yellow. Gazing at a Van Gogh painting of a star filled sky, it seems as if he knew that the lights he saw in the dark night, had traveled from the deepest reaches of time. According to physicists, as we gaze at the stars, in essence we are looking back towards the beginning of time.

Early in my career, as an exhibition of my paintings closed at a gallery in Osaka, Japan, a fellow artist turned to me and somewhat derisively asked, “So what’s next? Will you travel from city to city painting their nights?” I didn’t come up with a quick rejoinder then. But I know what I would say now, “You can’t paint the day without the night.”

This Essay, Night Painting, by Gregg Chadwick is included in Burning the Midnight Oil: Illuminating Words for the Long Night’s Journey Into Day, edited by Phil Cousineau. 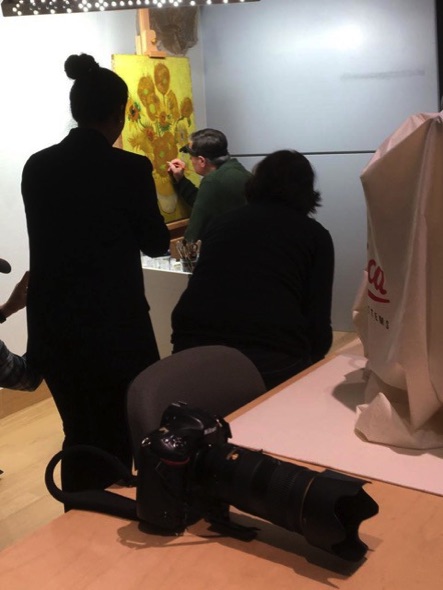 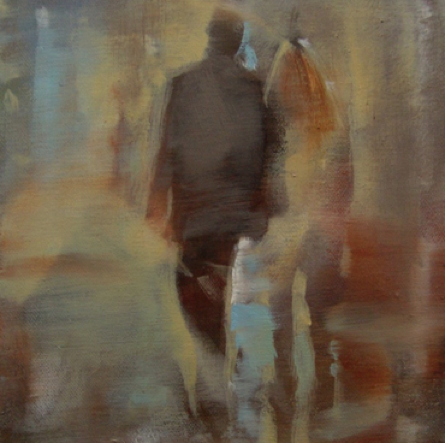