Sergio Arau Meets Sergio Arau
Sergio is a close friend and we often speak deeply about art, love, time, and politics. I remember him telling me the story of meeting the revolutionary Ché late one night in his father's Mexico City kitchen. Perhaps the Academy Award winning screenwriter who purchased "Heavy Mex" at The Other Art Fair in Los Angeles in 2018 will write a film starting with that moment. 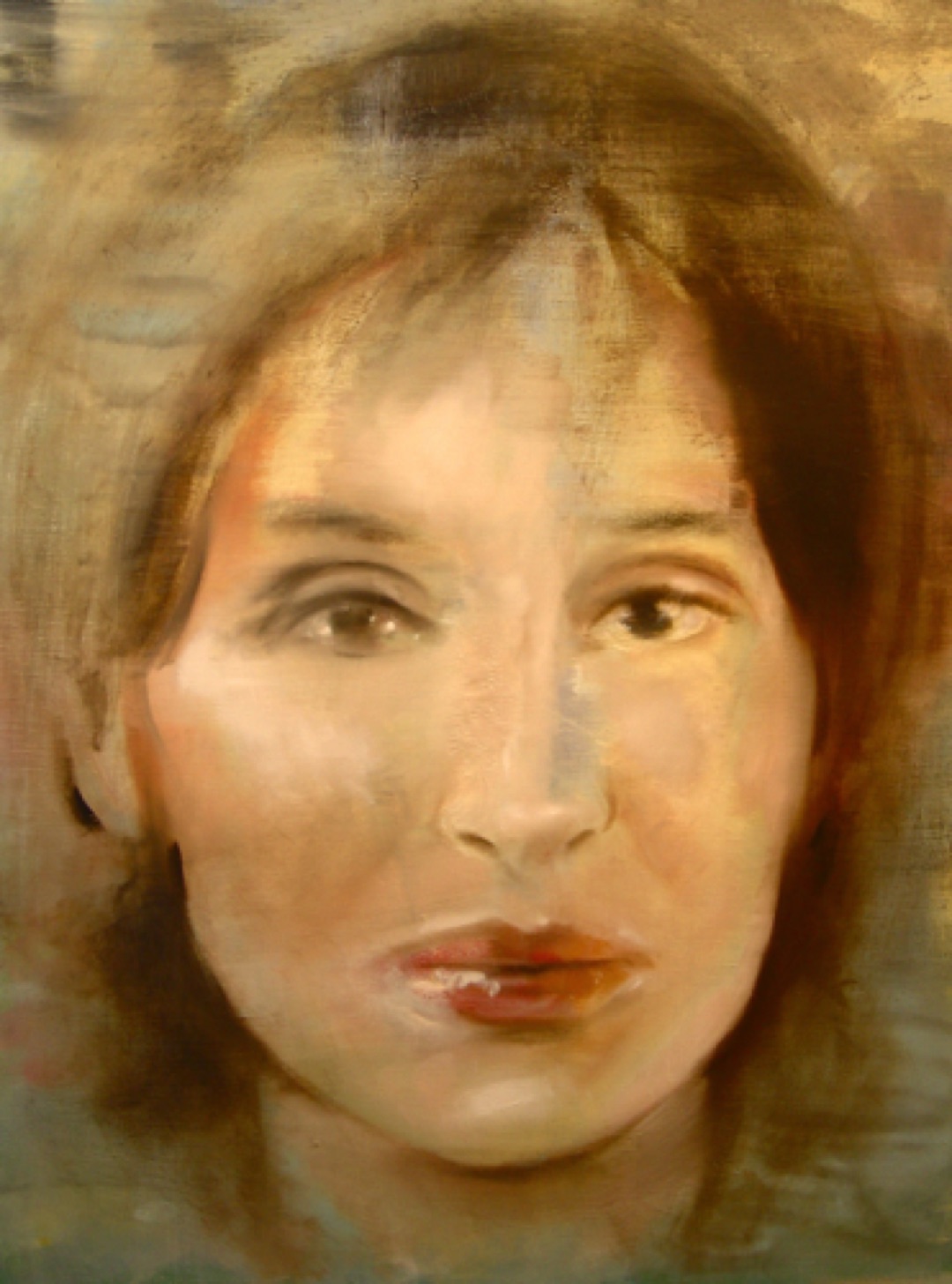 Gregg Chadwick
Yareli Arizmendi
40"x30"oil on linen 2011
Yareli is a brilliant actress, writer, and director
She rose to prominence with her role as Rosaura in the film "Like Water for Chocolate."
Yareli Arizmendi and Sergio Arau Collection, Hollywood, California 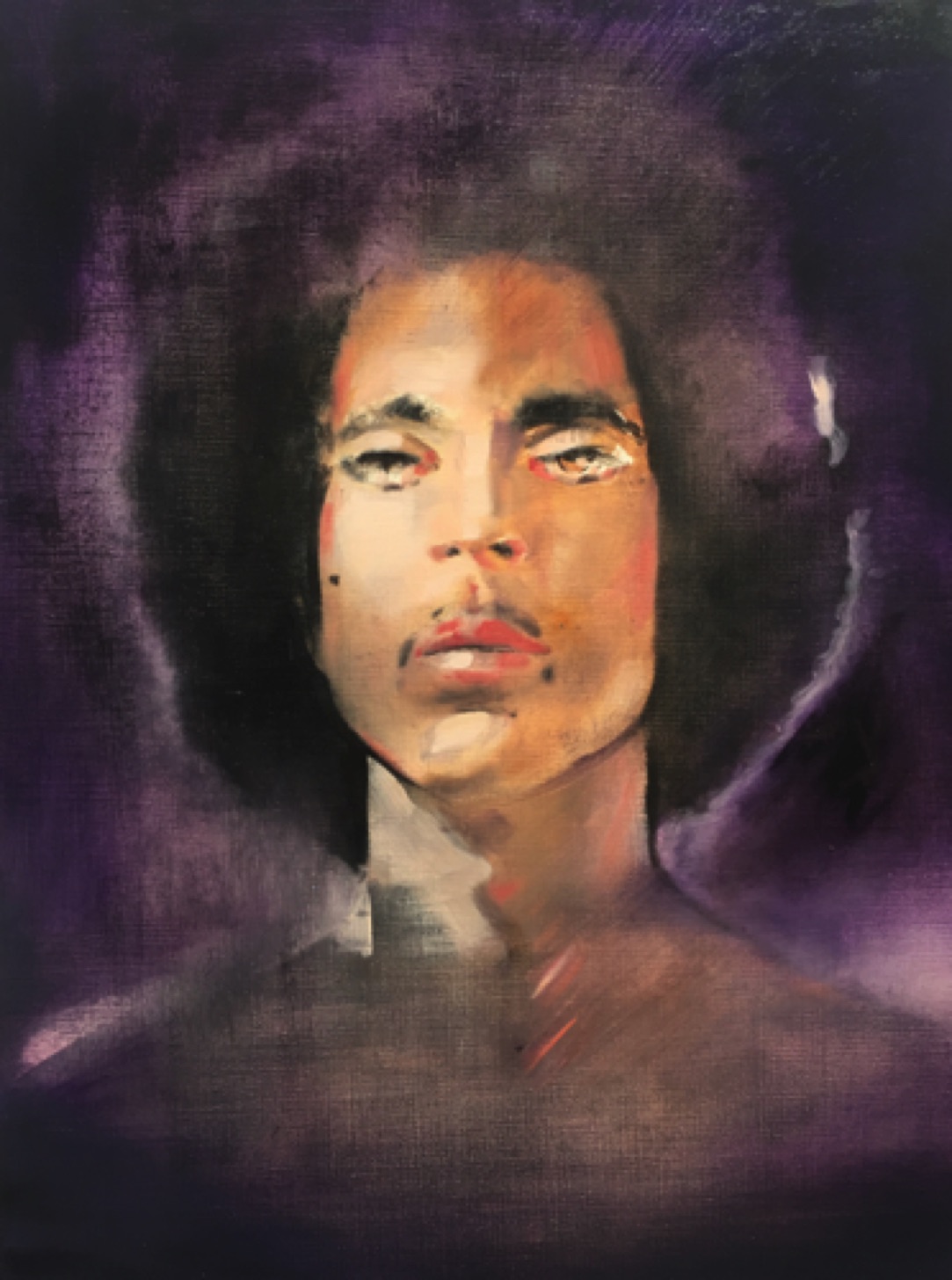 Gregg Chadwick
Purple Rain (Prince Rogers Nelson)
24"x18" oil on linen 2016
Gregg Chadwick
Changes - David Bowie
41.5"x25.5"pastel on paper 2016
Gregg Chadwick
The Call - Need
36"x48"oil on linen 2009
With his music, words and images, Sergio Arau has inspired me to create a series of paintings that feature him as the main character in my painted movies. Rock Star, actor, director, screenwriter, and artist Sergio Arau has often performed while wearing gear honoring Mexico's most famous wrestling star El Santo (The Man In the Silver Mask). Known as lucha libre, Mexican wrestlers such as El Santo are defenders of the poor and vulnerable. By taking on the persona of the Luchador (wrestler), Josh Kun writes in Audiotopia: Music, Race, and America, Sergio Arau and his bands have mixed "the traditional with the contemporary, the rural with the urban, the American with the Mexican, the charro with the rockero." 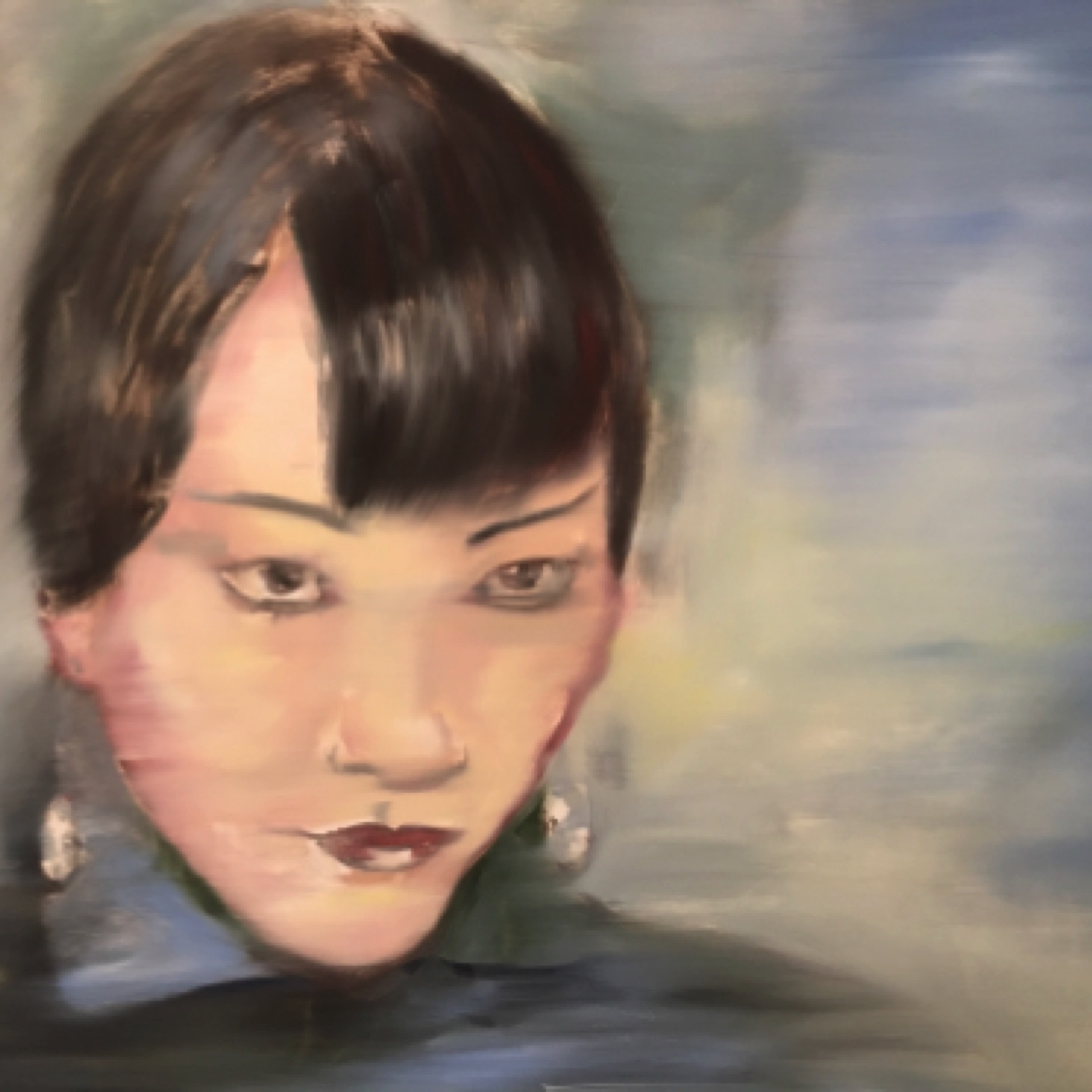 Gregg Chadwick’s portrait of Anna May Wong was included in the exhibition - Fresh Faces: New Portraits by Los Angeles Artists presented by Saatchi Art. Anna May Wong was the first Chinese American film star, and the first Asian American actress to gain international recognition. Her acting career went from silent films to talkies, to stage, to radio, and to television.Born in Los Angeles, a few blocks from Chinatown, Anna May Wong's career has been an inspiration for many. My painting was created as an homage to Anna, sourced from numerous photo stills and film clips from the era. Exhibit ran from March 24 through May 13, 2016.
Ailsa Chang Collection, Culver City, California 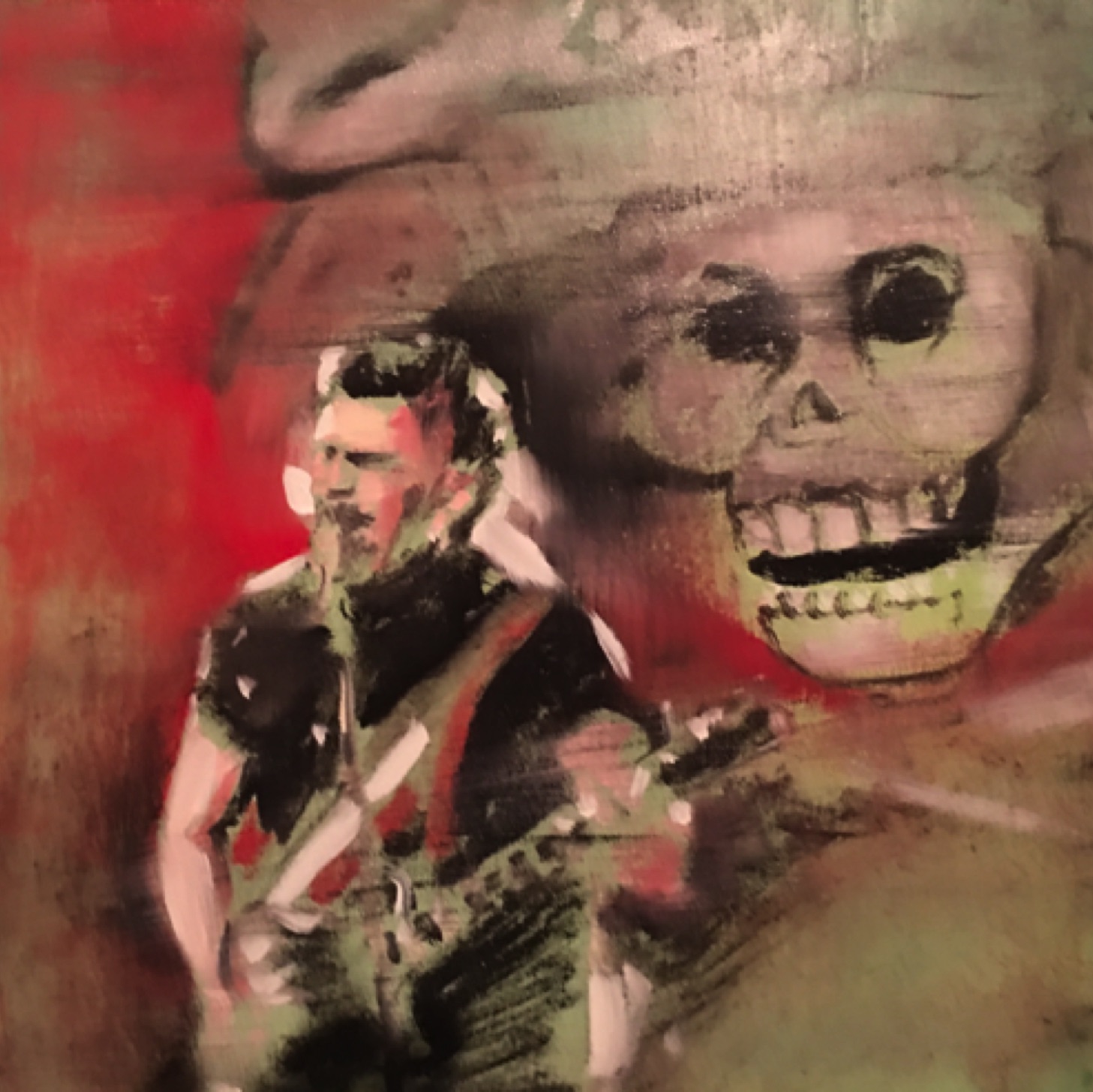 My painting "Heavy Mex " carries Sergio Arau into a Los Angeles rock club where he wildly strums his fender guitar.

He is the son of film director Alfonso Arau and the husband of the brilliant actress, writer, and director Yareli Arizmendi.
Sergio Arau rose to prominence as a founding member of the band Botellita de Jerez formed in 1983. 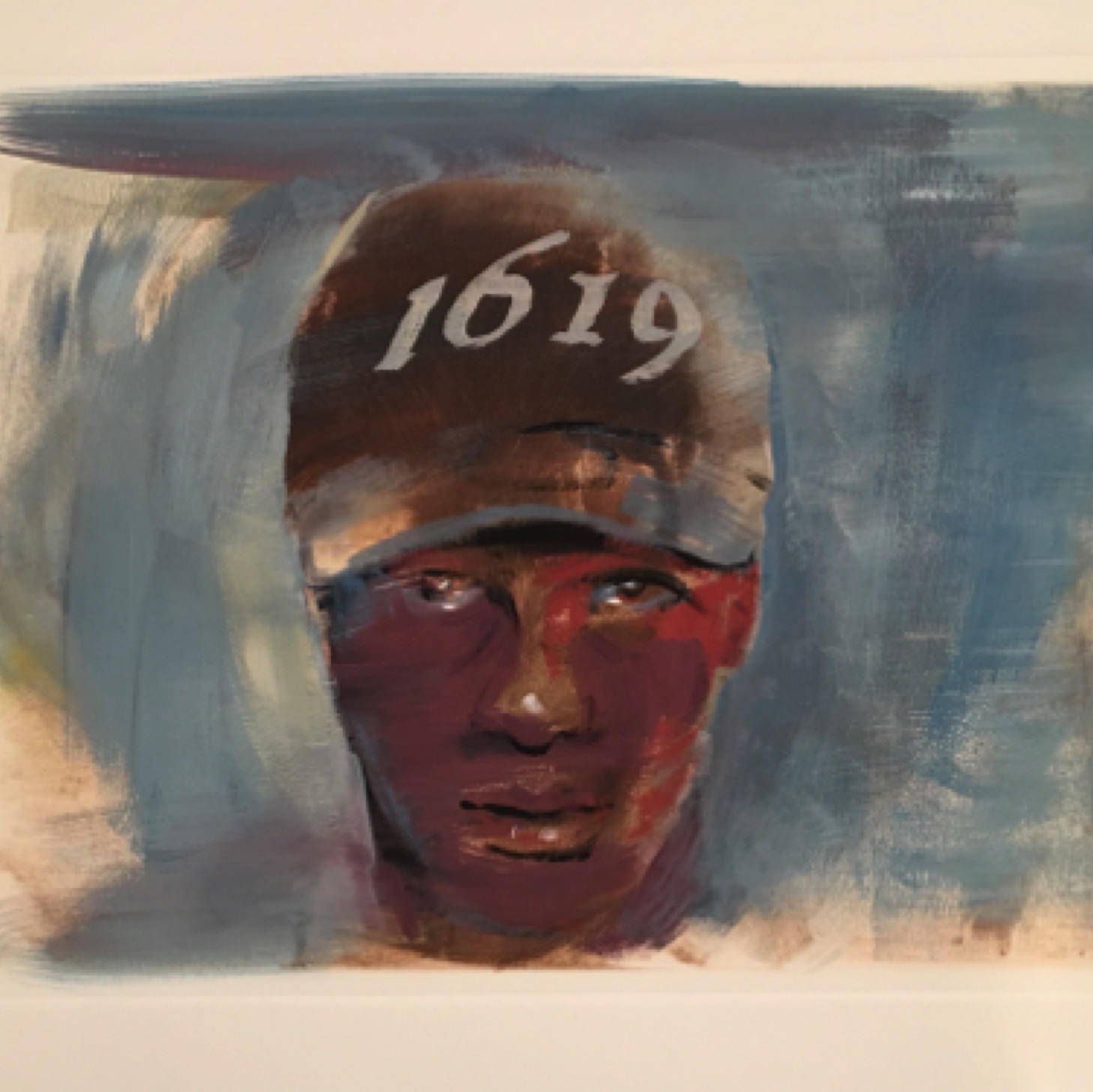 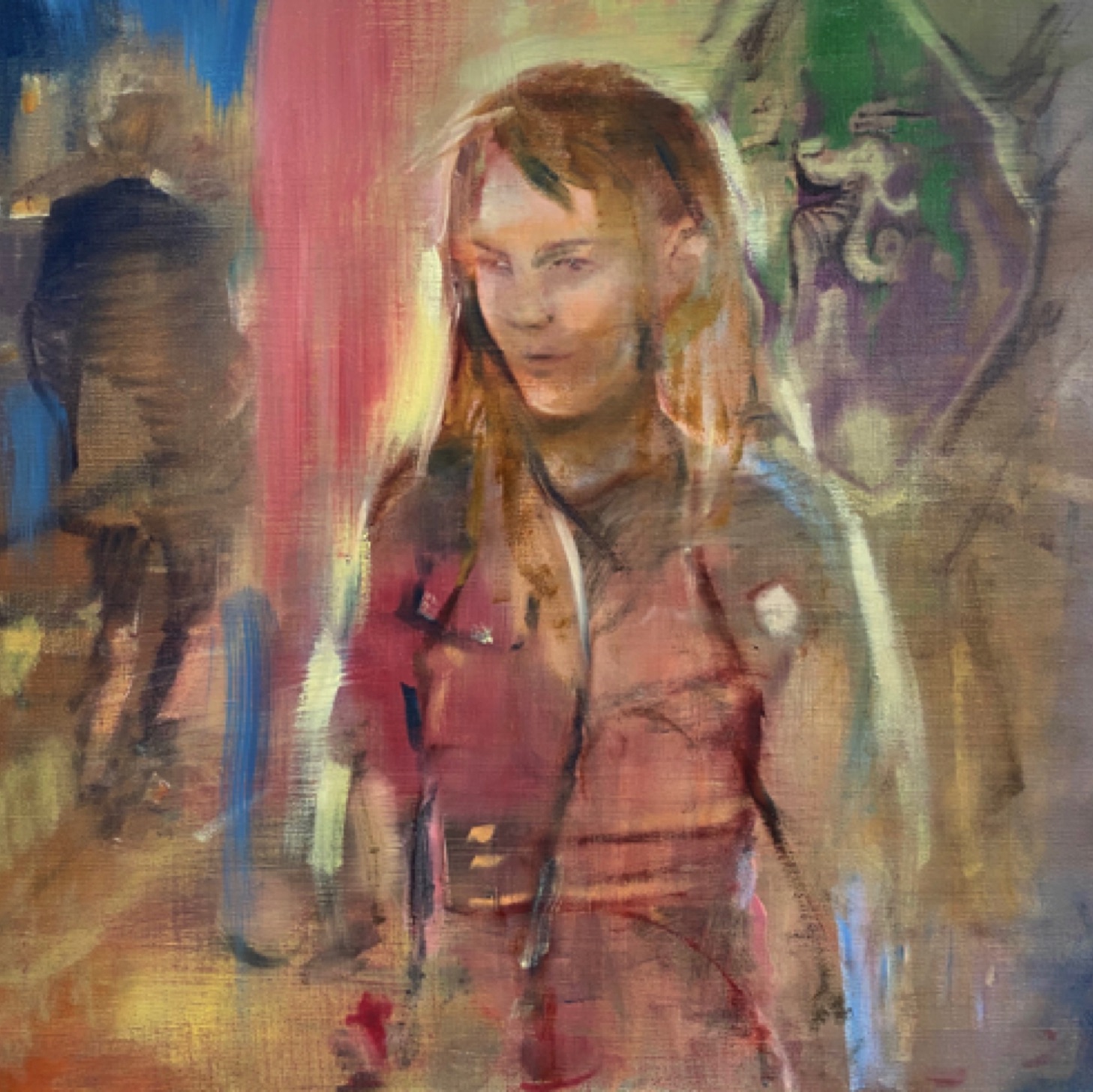 Gregg Chadwick - Cassiel's Flags 24"x24" oil on linen 2020
Portrait of Cassiel with a flag from the Drago Contrada di Siena floating behind her alluding to a childhood journey to Italy where I purchased a small Drago flag for her. Dragons featured later in her life as well in her love of the novel “Seraphina” by Rachel Hartman. In “Seraphina” humans and dragons 🐉 live in an uneasy peace. Dragons can at times take human form so they are fluid. Most of all dragons want to be loved, to belong, and to find peace in self-acceptance. As Cassiel came out as transgender, she offered this book to us as a way to understand. 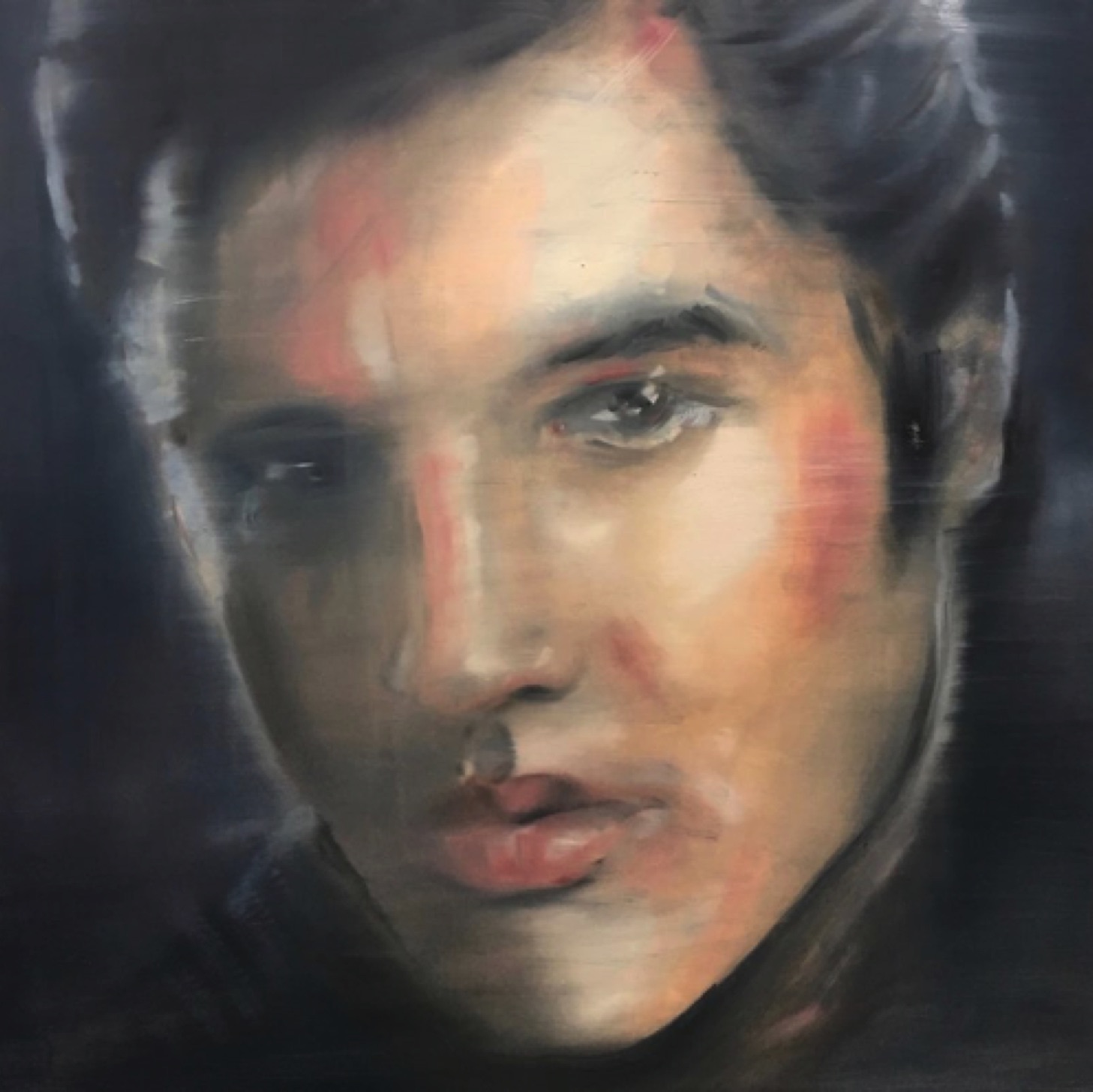 “Gregg Chadwick takes the opposite stance in the oil-on-linen "Elvis Presley (Suspicion)." Here, a familiar depiction of the singer is rendered in blurry, shadowy lines, as if his memory is slowly fading and becoming the stuff of rumor and legend tending toward oblivion.” 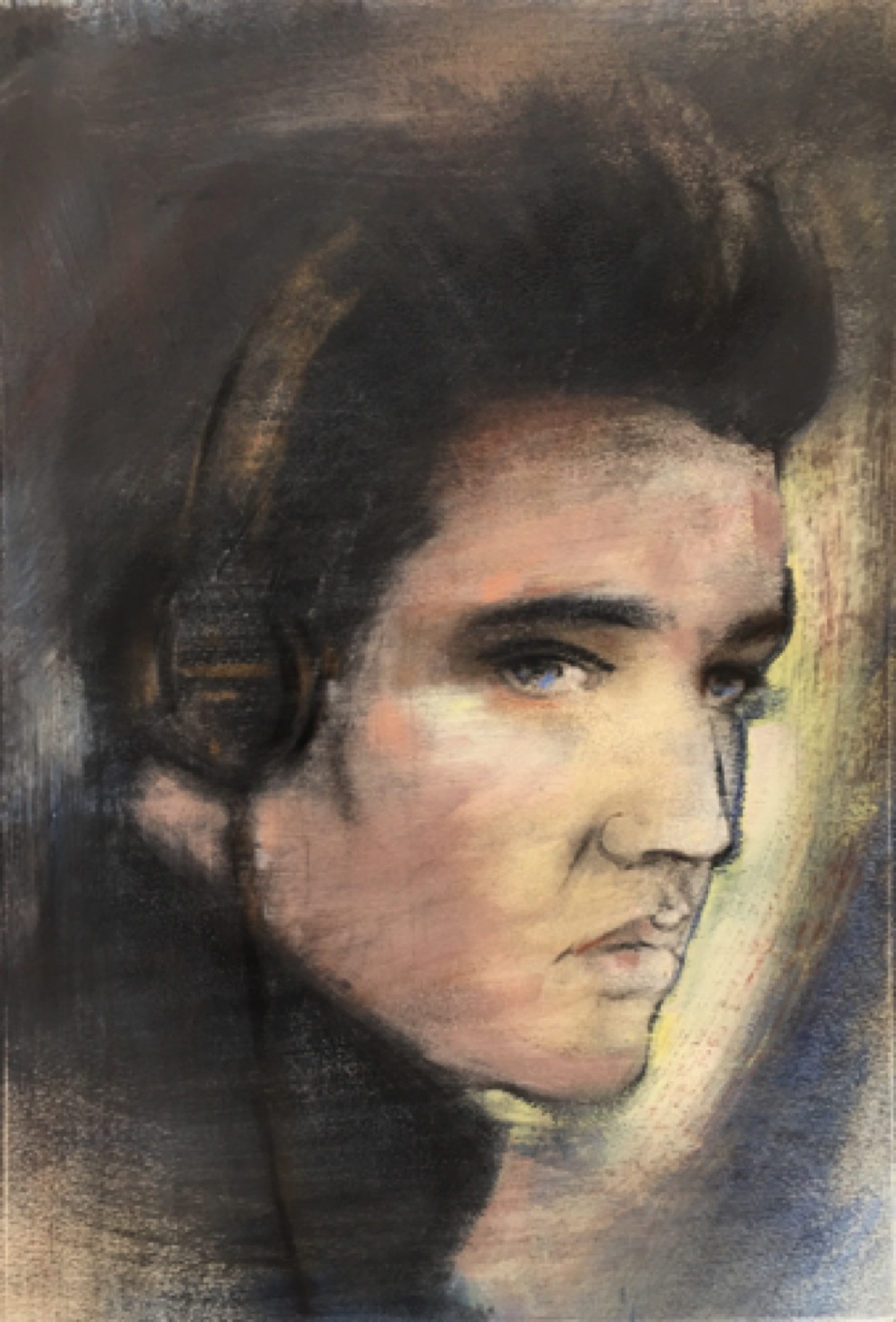 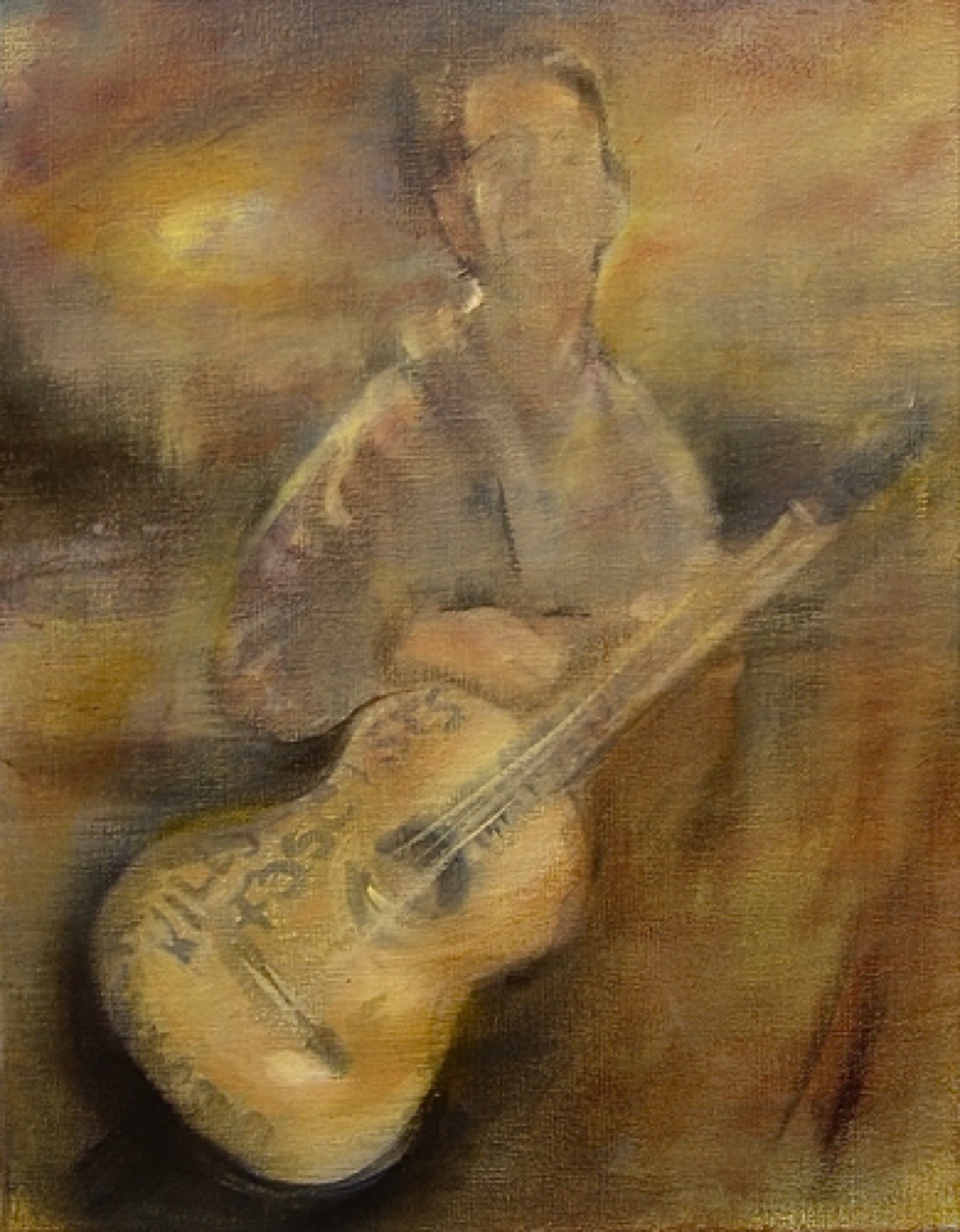 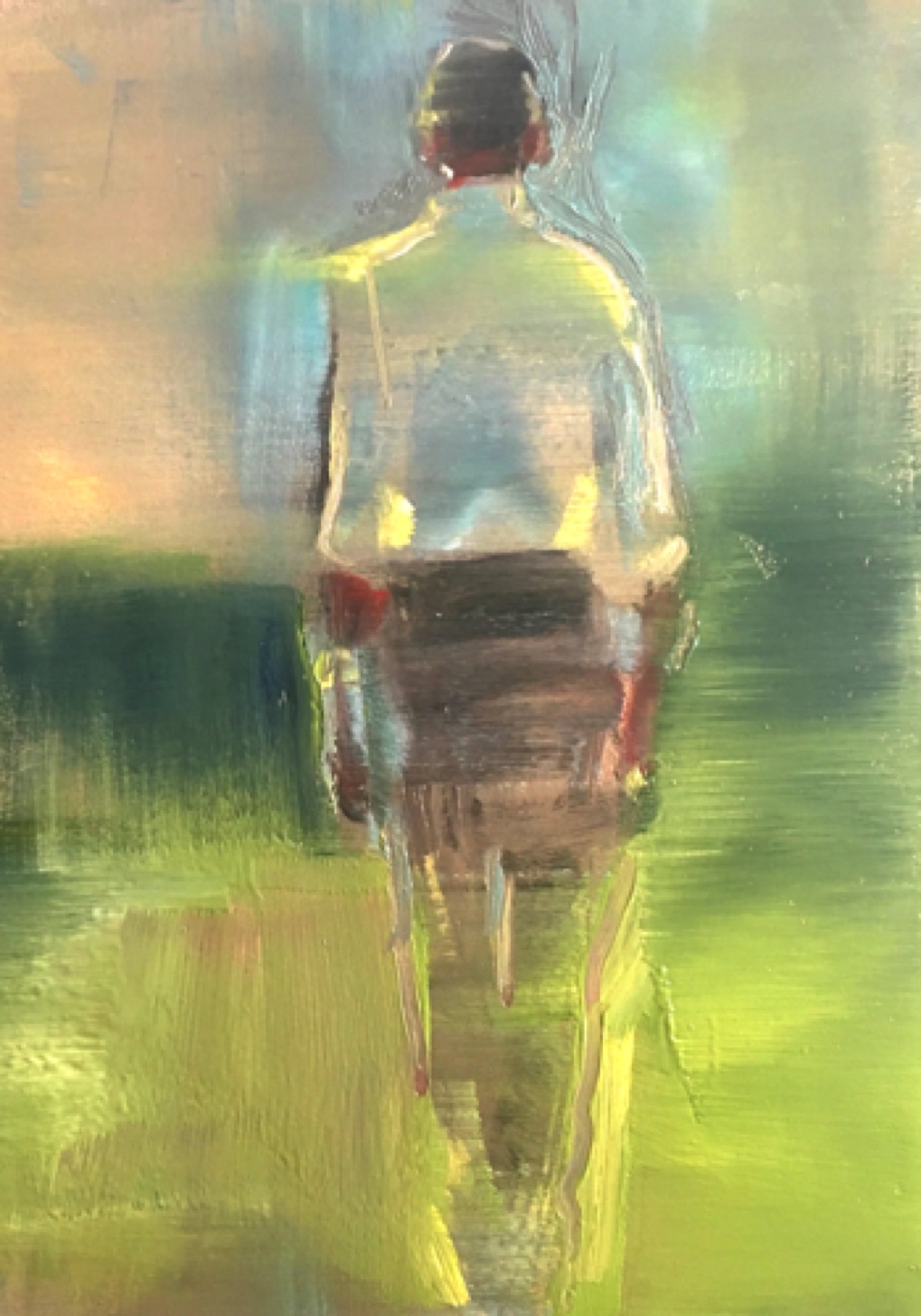 Gregg Chadwick
A Walk With Obama
6"x4"oil on panel 2019
Private Collection, Dallas, Texas
(Exhibited and sold at The Other Art Fair, Dallas 2019) 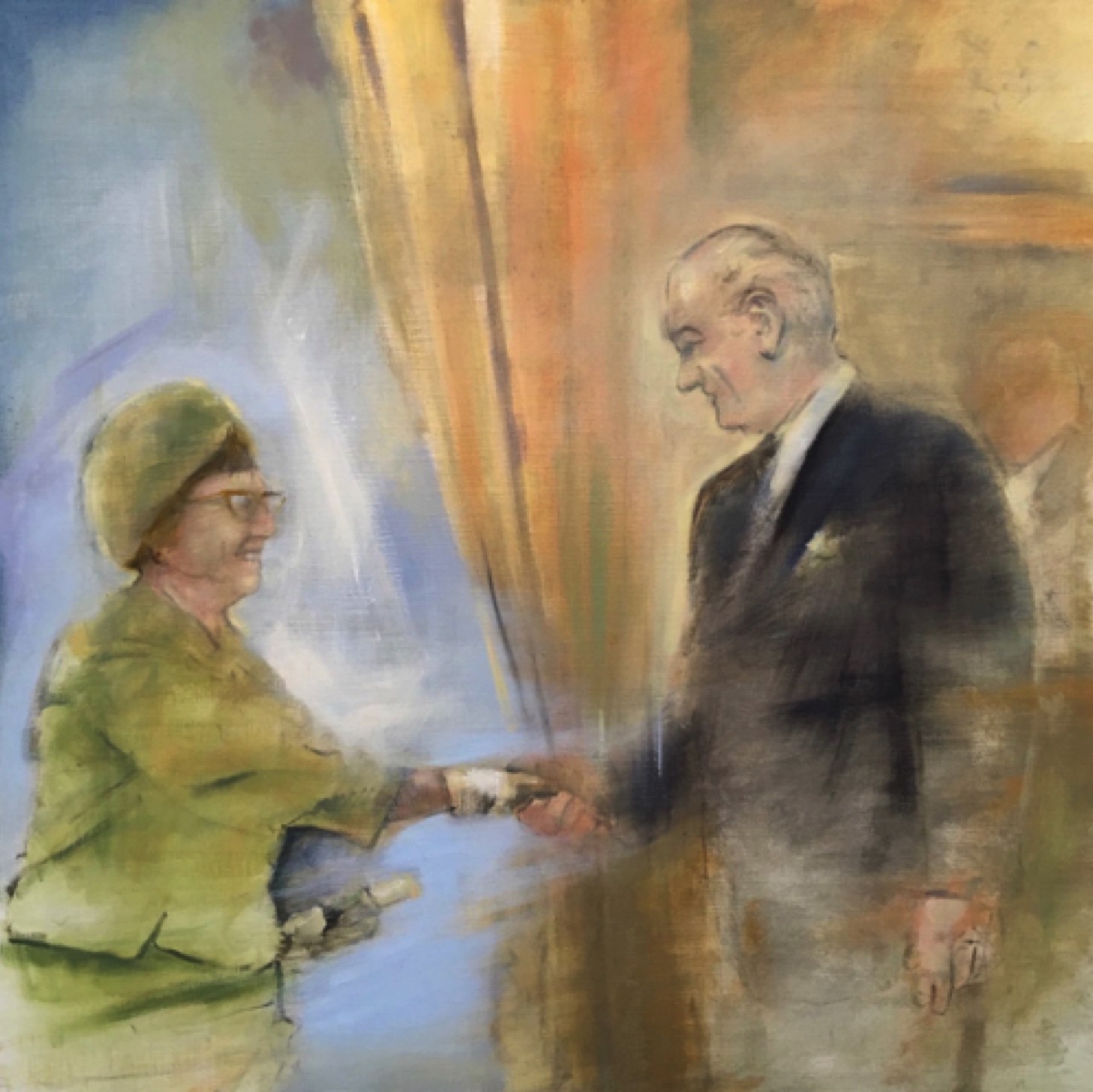 "From between these layers... bursts here and there in every one of Gregg Chadwick’s paintings a display of spectacular luminosity, evocative of a powerful life force or energy source beyond our normal physical experience."